US Soccer’s Grassroots Player Development Philosophy Player Centered Approach. This coaching method was adapted by US Soccer in January 2018.

This method of coaching takes a Player / Child-Centered Approach. Allowing players to learn by playing, make their own mistakes and figure out their own solutions will help them develop quicker as players and help foster a love for the game. Players learn in different ways and at different paces, so at the younger age groups adopting the Play-Practice-Play Method will be very beneficial.

The “traditional” method of coaching has been a Coach-Centered Approach. This involves coaches giving instruction with no options, which does not develop decision making skills and creativity. The players would be “rewarded” at the end of the session with a scrimmage. By restructuring the way your practice is organized gives players much more enjoyment and will keep their focus for the entire session. When kids are having fun they will work harder, be more engaged and improve at a faster pace, which makes a coach’s job much easier and enjoyable.

Every coach should shift their approach to Child-Centered, Guided Discovery and Play-Practice-Play.

Structure of a Play-Practice-Play Session:
– Organized in 3 phases. Starting with a free play small-sided game / scrimmage. The practice phase is an activity based on the theme / topic of your session. The final phase is a small-sided game with certain objectives and progressions.
– Although this method is recommended for the younger age groups of U6, U8 & U10; it is still constructive for older age groups.

Excerpt from US Soccer website
“At its core, the philosophy of U.S. Soccer’s grassroots pathway initiative is Play-Practice-Play, a philosophy coaches learn about in the Introduction to Grassroots Coaching module. This approach will focus on the player experiencing and learning through play while also empowering the coach to support his or her player’s learning and developmental needs.”

A tactical theory of soccer in which any outfield player can take over the role of any other player in the team. (Positionless Soccer)

Qualities of a Good Coach

How do we organize learning:

Properly preparing your team for game day is a key to success. Every opponent presents a different challenge. Setting goals for each game or tournament, and season goals are very important.

Being organized and putting together a plan for your practices is an important aspect of coaching. Please click the links below for practice planning ideas.

Great article in the New England Soccer Journal, June 2015 Edition, written by Adam Scott.  Details the impact that parents and coaches have on young athletes through sports.  Also, discusses the drop off in participation at age 13. John O’Sullivan, Changing the Game Project, has started a movement on this topic. Please click here for the website. Click Here for NE Soccer Journal Article.

Concussion Information Concussions are becoming more common in youth sports, including soccer. It is important for coaches, parents, and players to get educated.
Concussion Facts

Manchester United Academy clinic
My son attended a Man U Academy clinic in June 2013, through Strikers United in Acton. The Director of that club has ties to Manchester, England, so he was able to set up this amazing opportunity for players in Massachusetts. It was the best coaching that I have ever seen. The coach that had my son’s group, Lee Unsworth, played for 13 years in the 2nd Division in England and currently coaches the U11 Man U Academy Team. Watching him run the session and listening to his coaching points was unbelievable and taught me a lot. I had a chance afterwards to talk to him about the Man U Academy. Their philosophies are so much different than those in our country. They put their priority on training, not games. They have friendly matches against other Academy teams, but do not play in a league or put emphasis on results. Strikers United is planning to have the Man U Academy coaches back next year! I will certainly post the information on this website.

Education
Improving as a coach involves experience and education. The NSCAA enhances the development of coaches of all levels. I have attended many coaching courses through the NSCAA and the USSF. You learn something new and different at every course you attend!

Coaching “In the Game”
I believe that the best method of coaching during a game is giving limited instruction / direction and just letting the kids play.  Coaching is done at practice.  The game is a place for the players to show what they have learned.  They need to be able to make their own decisions in games.  “The game is the best teacher.”

Great Philosophy for U6 – U8 Program
An 8 week program curriculum for U6 – U8 / Junior Academy players.  Two days a week, train one day and play games the other day.  Two teams train together to allow coaches to support and learn from each other.  The goal is to develop the age group, not the teams, while developing the coaches.  Game days will be split into two fields, playing 4 v 4.  Coaches will oversee all players on game day.  The small-sided games will allow the players to be involved in game situations.

Dutch Box
Useful as a warmup for a training session or a game, also can be used for an entire training session. Very effective game! Your team can work on so many different skills in this one game. 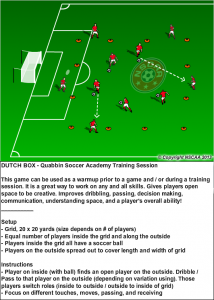 Focus on one topic for one full week of training / practice.

Use your pre-game warmup (20-30 minutes) as a mini technical session.